It was while idling on hot asphalt, in line waiting to cross the Canadian border, that a lady dashed across the tarmac wildly exclaiming our car (Tinkerbelle—an 812 Cord Beverly) was leaking green liquid near the front wheels. This was one more indication Tinkerbelle couldn’t hold her coolant. In the past Tinkerbelle had often required additional coolant after long driving stints, and sometimes, usually at idle, the bubble disappeared from the King Seeley temperature gauge face although the car never “boiled over.”

At the 2007 Palo Alto Concours, Josh Malks suggested I lessen both the need for additional coolant and the car’s propensity to overheat by adding an expansion (overflow) tank and mildly pressurizing the cooling system. Josh showed me his set-up and suggested I talk with Jim Lawrence who, to the best of my knowledge, pioneered the concept on Cord 810/812 series cars. 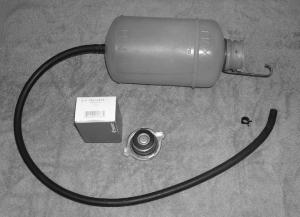 Jim was a Volvo dealer and, accordingly, adapted a Volvo expansion tank to retain overflow. Jim told me he installed a radiator pressure cap rated at four pounds and an eight millimeter (5/16”) rubber hose to connect the tank with the overflow tube running down the left (driver’s) side of the radiator.

Before the next driving season I collected a Volvo 164 tank (because it has a nice shape, fits into the space available, hangs nicely from the radiator-to-firewall strut and was what Jim recommended), a radiator cap from NAPA (part #703-1412), a suitable length of rubber hose and two hose clamps. With a hook fashioned from a piece of brazing rod I installed the tank in about a half-hour. It can be dismounted in less than five minutes and re-installed in about the same amount of time.

Some maintain every drive in a Cord is a test drive. Our test for the newly-installed expansion tank occurred on the 2008 Big Sky CARavan. In all, Tinkerbelle traveled about 3,000 miles in all kinds of conditions. Throughout the CARavan the car did fine losing little or no coolant. The acid test came during our return from Big Sky to our home in Puget Sound. The temperature was well over 100 degrees and Tinkerbelle was pulling long mountain passes. Occasionally, we would stop at idle for a few minutes. If ever a car should have balked, it was then. Tinkerbelle did not flag. She required no additional coolant and did not overheat. At the end of the day another car traveling with us was topped off with six quarts of water!

If you are a long-distance driver or drive your car in very warm weather you might consider installing an expansion tank with a low pressure cap. It is easy to do and can be removed easily for any reason. We found with Tinkerbelle the loss of coolant during stressful drives was dramatically reduced.